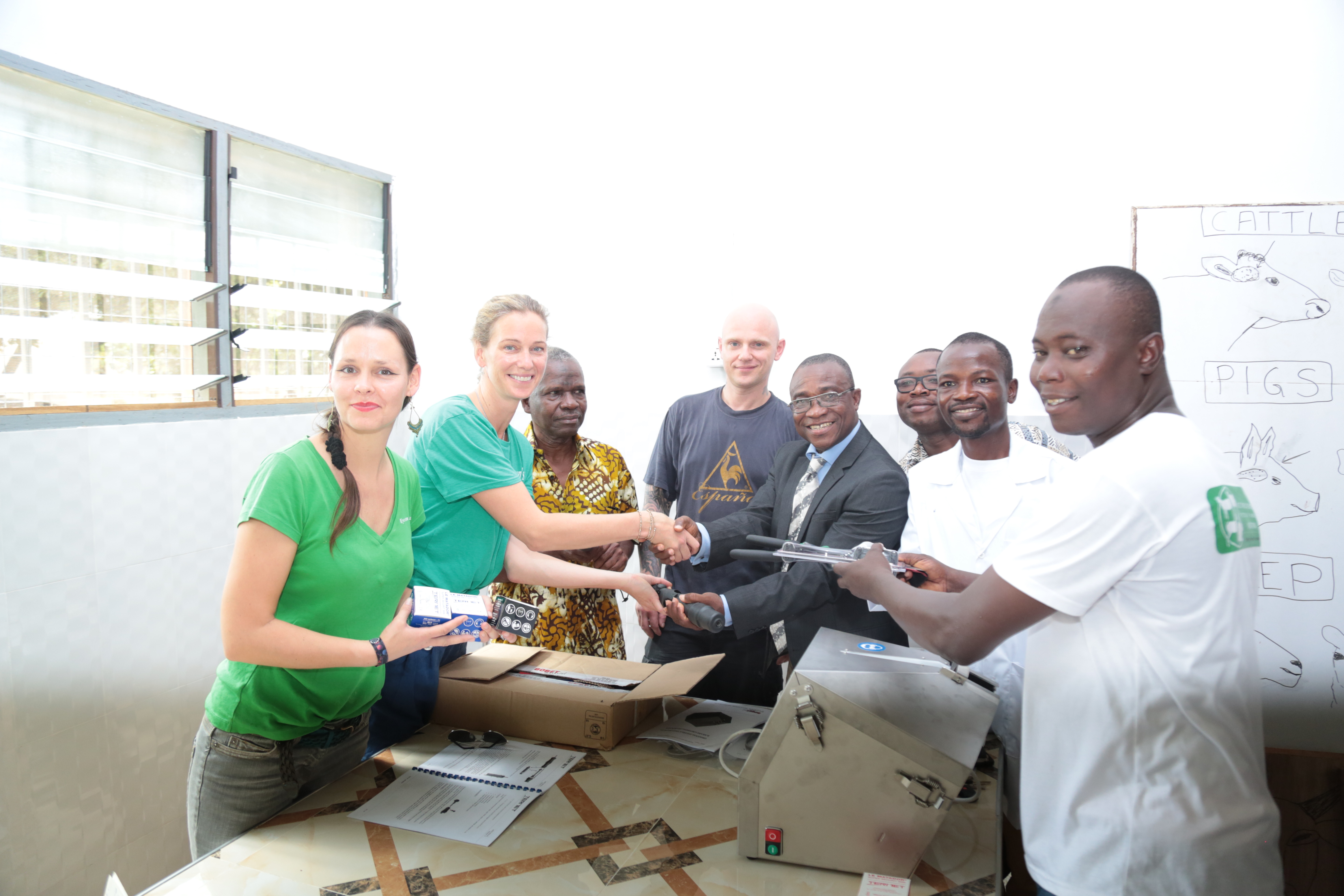 The Meat Processing Unit (MPU) of the Department of Animal Science, School of Agriculture, has received a donation of modern slaughtering equipment  from Eyes on Animals, an animal right organisation based in the Netherlands.

Presenting the equipment, the leader of Eyes on Animals, Lesley Moffat, said all living beings have the right to peaceful life and death. She said the equipment was to assist MPU to use humane methods in slaughtering animals.  She indicated that the equipment known as stunner would lessen the pains the animals go through before being slaughtered.

Speaking on behalf of the Dean of Agriculture, Prof. Elvis Asare-Bediako, the Head, Department of Agriculture Engineering, Dr. Robert Sarpong Amoah, expressed gratitude to Eyes of Animals for the kind gesture. He said the Unit had been upgraded with the installation of the equipment. “We assure you of they shall be put to good use for the benefit of students’, slaughterhouse operators and meat consumers alike.

Prof. Asare-Bediako thanked Eyes on Animals for coming with a team of experts to build the capacities of staff of the Unit to deliver effective training in standard practices for animal handling and slaughterhouse operations. He was confident that the collaboration between UCC-MPU and Eyes on Animals would continue to be strengthened to promote the welfare of animals.

The Dean noted that “UCC-MPU is a flagship unit for the commercial processing of meat and has gained popularity and high patronage among meat consumers in the University Community and Cape Coast Municipality due to the hygienic conditions under which the unit operates which gives assurances of food safety”. He noted that in recent times consumers have become more conscious of their safety and health in relation to what they eat.

“There has been public outcry against the unhygienic conditions under which some slaughterhouses operate in the country. People are particularly concerned with the health implications of the use of lorry tyres as sources of fuel for meat processing,” he observed.

Prof. Asare-Bediako said it was incumbent on slaughterhouse operators to give greater assurance to meat consumers by adopting standard practices on the safety of meat products they sell.  “We are happy to note that UCC-MPU has been championing this effort by using its facilities for training slaughterhouse operators in Standard Operating Procedures for animal handling, slaughtering and processing” he indicated.

On the part of UCC-MPU, Prof. Asare-Bediako said the Unit has been sensitizing the public, especially animal handlers on Animal Welfare Issues.  “There seems to be lack of awareness of the effects of the harsh and cruel treatments meted out to animals, especially during transportation and slaughtering,” he said. According to him, “We need to note that they are living entities with nervous systems and therefore, they suffer the same pains and stresses we go through as humans. Their challenge is that they can’t complain” he noted.

He reminded butchers and the general public that the physical stresses we subject the animals to affect the quality and shelf life of their meat products. “It is therefore important to handle animals in a friendlier manner, for our own sake and for the sake of the animals” he advised.

The Coordinator of MPU, Dr. Moses Teye, demonstrated how to use the slaughtering equipment. He noted that unlike the past where, one needed lots of hands to help slaughter animals, the equipment made it easy by putting the animal in an unconscious state before it was finally slaughtered. "Those days we used to restrain these animals by tying them so much before we slaughter them, it was quite tedious, time wasting, you  needed a lot of personnel to do that but with this humane slaughter equipment, you need just two people help do the work,” he explained. He thanked the team from Eyes on Animals for the donation and assured them that they would be put to good use.

A training workshop was later held for butchers in Cape Coast Metropolis to introduce them to humane slaughtering technology.