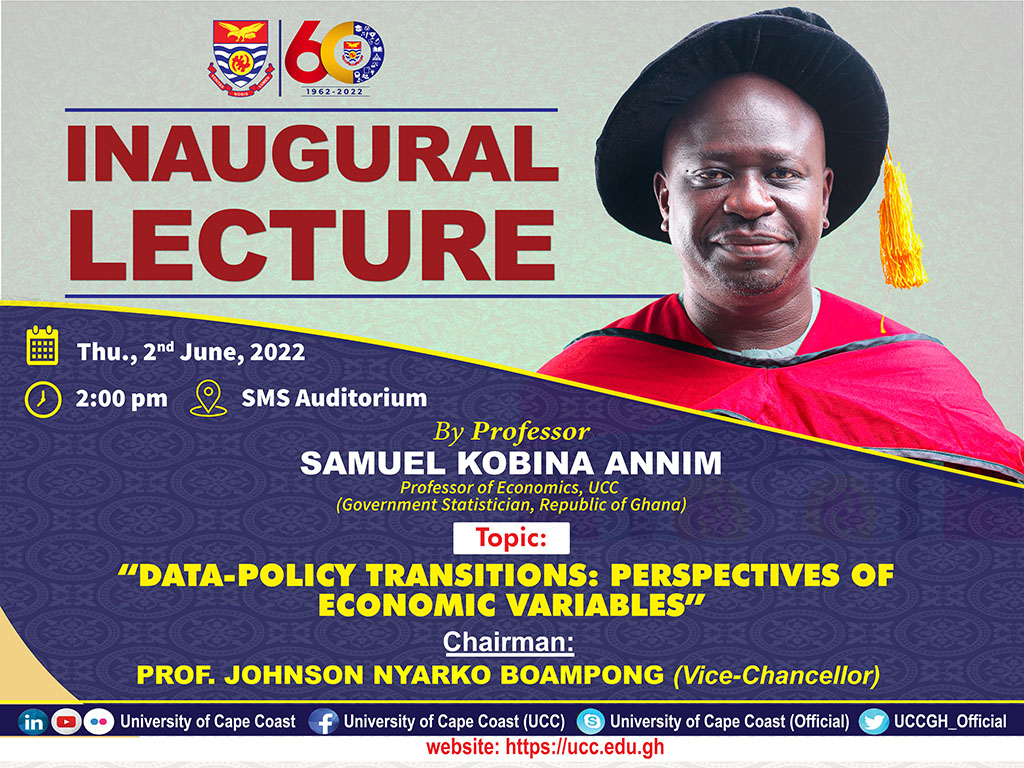 The University community and the general public are hereby invited to the Inaugural Lecture to be delivered by Prof. Samuel Kobina Annim, Professor of Economics, UCC and Ghana Government Statistician.

Only Professors who have given their Inaugural Lecture would be required to robe to welcome their colleague. The gowns would be available at the Reception of the School of Medical Sciences Auditorium on the day of the programme.

All are cordially invited.

Professor Samuel Kobina Annim is a Professor of Economics at the University of Cape Coast (UCC) and currently the Government Statistician of the Republic of Ghana. He is dedicated to promoting knowledge transformation across the continent and beyond, and passionately supports national and global development agenda.

He has made scholarly contributions to the field of Micro-Development Economics and Applied Micro-Econometrics with 42 peer-reviewed journal articles, five book chapters, 18 technical reports and four policy briefs. His publications are available in journals such as World Development, Journal of Development Studies, Journal of International Development and the Oxford University Press. Most recently, he co-authoured an award-winning journal article which was adjudged the top cited publication in the Africa Development Review for 2020-2021.

Broadly, his research areas of interest are in micro-finance, poverty, health and household issues in sub-Saharan Africa and Asia with a focus on Analytical Techniques: Micro-Level Data Management and Micro-Econometric Analysis. Individually and in collaboration with other researchers, Professor Annim has made contributions, leading to investments in micro-finance and reshaping its practice, both in Ghana and internationally. In the last five years, his work has been oriented towards the study of methodological issues to understand how research is conducted and to increase the scientific rigour of research conducted in this context.

Professor Annim is a faculty of the Department of Applied Economics, where he has been lecturing since 2003. Prior to his secondment to the Ghana Statistical Service (GSS), he taught postgraduate and undergraduate courses, including Research Methods and Computer Applications (Applied Micro-Econometrics), Development Economics, Micro-Finance Paradigm and Poverty in Ghana, Development and Finance, Intermediate Statistics and Micro-Finance Paradigm.

As part of his commitment to training the next generation of economists, Professor Annim has supervised the successful completion of theses of 13 doctoral students in the past decade. In 2018, he received an award in recognition of his doctoral supervisory role for one of the best doctoral theses during the 17th Session of the 50th Congregation Ceremony of UCC. His teaching and research philosophies are underscored by the demonstration of theory with real data, and proving and communicating contextual differences.

Professor Samuel Annim assumed office as the Government Statistician at the Ghana Statistical Service (GSS) in March 2019. In his first year in office, he led GSS to develop a Five-Year Corporate Plan and a new organisational structure. In addition, he supervised the passing into law the Statistical Service Act, 2019 (Act 1003) by Ghana’s Parliament. In the last two years, he has led the conduct of Ghana’s first digital census, provided guidance and mobilised resources for the implementation of more than 10 traditional and non-traditional data collection exercises and directed the Service to collect its first nation-wide panel data on livelihoods.

Professor Annim held several leadership positions prior to his appointment as Government Statistician, including Head of the Department of Economics (2015 – 2016), Deputy Director of the Directorate of Research, Innovation and Consultancy (DRIC) (2013 - 2016) and Director of DRIC (2016 – 2019), where he instituted key reforms. He led the transformation of the Department of Economics to the School of Economics and was responsible for setting up the UCC Centre for Micro-Finance, which mounted the first academic programme in micro-finance in Ghana.

In recognition of these contributions, Professor Annim was honoured as a recipient of the Vice-Chancellor’s Award for Innovation and Professionalism in 2018 and an African Social Research Initiative Award to facilitate the set-up of the Centre for Data Archiving, Management, Analysis and Advocacy (C-DAMAA) at the then Department of Economics, UCC. He was the Coordinator of C-DAMAA from 2014 to 2019.

Professor Annim’s leadership service at DRIC was geared towards promoting cutting-edge research and laying a stronger foundation for the University regarding its research enterprise. He clearly and persuasively articulated this vision for quality research and publications as well as promoted credible publication outlets. No doubt, Professor Annim passionately and relentlessly drove this vision in the University whenever he had the opportunity. He contributed immensely to the development, promotion and institutionalisation of many research and visibility systems in the University. He passionately promoted the visibility agenda of faculty on platforms, including Google Scholar, ResearchGate and Scopus. He initiated the tracking, development and publishing of reports on the research output and productivity of the faculty of the University. He was an advocate not only for quality data but also for quality research for greater research impact and visibility. He exhibited a keen interest in empowering faculty through training on bibliometrics and research impact.

He has contributed to the growth of the University through his leadership and involvement in developing relevant policies, including the Corporate Strategic Plan (2012 – 2017; 2018 – 2022), the first Research Agenda (2013 – 2018), Postdoctoral Policy (2014), Research Policy (2014), Consultancy Policy (2018), Intellectual Property Policy (2018), Amendment of Postdoctoral Policy (2018), and Policy for Hosting Journals at UCC (2019). His leadership established the Industry and Innovation Unit (IIU) at DRIC to enhance the actualisation of the community service obligation of faculty in UCC through the institutionalisation of a structured mode of engagement with industry players, social laboratories and policy-makers. He also served on several Boards and Committees of the University to contribute to its development.

Professor Annim has been an Honorary Research Fellow at the School of Accounting, Economics and Finance of the University of Kwazulu-Natal, South Africa, since 2018. He is also an Associate Member of the Association for the Advancement of African Women Economists (AAAWE) (2014 – date), a member of the International Union for the Scientific Study in Population (2007 – date), and a member of the Africa Economic Research Consortium (2001 – date).

With his background and track record in research leadership, he has contributed to capacity strengthening within the Association of African Universities (AAU) by, among others, facilitating AAU-organised workshops on Research Leadership, Communication, Partnerships and Collaboration (2019), and Data Ethics and Skills for Reproduction of Research Findings using Stata (2018).

He currently serves as a member of the Executive Committee of the PARIS21 Board and the IPUMS-DHS advisory board.

Realising the indispensable gains associated with a data-led economic development requires a sustained iterative interface between conceptualisation and implementation of national policies; the use of data along the entire spectrum of livelihood transformation and economic development; and estimations of different policy scenarios. In recent times, this data-led imperative has gained prominence, given global pandemics, climate change and economic shocks. Based on the required scope for driving a data-led development, and the fact that Ghana’s economic development is yet to occur despite spikes of economic growth in the last half-century, this lecture discusses the data-policy landscape in Ghana. A lecture on “Conceptualisation of National Policies: Issues of Capacity and Practice” preceded this lecture, and a third will follow on “Estimations and National Policies: Perspectives of Economic Variables”.

The first lecture exposed the contradictions in Ghana’s Gross Domestic Product (GDP) growth performance and other macro-economic indicators. The lecture revealed stark volatilities across all market-driven economic indicators in Ghana, suggesting flaws that hinder the achievement of national policy outcomes and impact, and demonstrated weaknesses in the capacity and practice of conceptualising national policies. These findings informed my call for “redirecting our proclivity in designing less data-informed and standalone policies to rigorous policy conceptualisation processes and an assessment of their outcomes and impact”. Precisely, I argue that efforts should be geared towards the demonstration of the magnitude of the net effect (not binary outcomes) of interventions, effects of initial conditions on current outcomes and disaggregated outcomes and impact.

Considering my engagement with data as a producer, user, advocate, and custodian in my dual capacity as an academic and policy advisor, I put forward an argument on the need for researchers to estimate the “Data Bias (DB)” associated with the process of engaging with data. I also advocate the need to measure the extent and appropriate use of data among policymakers and researchers, leading to the institutionalisation of mechanisms for “Data Accountability (DA)”. Using the outcomes of my research on the impact of microfinance in reducing poverty and my role in promoting research and data integrity, I assert that estimating and institutionalising DB and DA will culminate in a “Data Integrity Framework (DIF)”.

Central to the proposed DIF are 12 indicators for assessing the appropriateness, reliability, and credibility of using data, statistics, and statistical data. These 12 indicators are: (i) motivation for policy directives; (ii) access to statistical data​; (iii) mode of data collection;​ (iv) source of data; (v) type of data; ​(vi) span, initial conditions, current happenings and reflections; ​(vii) missing data points; ​(viii) measurement of concepts and deviations from reality; (ix) presentation of statistical data; (x) comparability; ​(xi) regularity and periodicity with data collection; and​ (xii) scope of data used for research and policy discussions. Premised on the orientation of research, including exploratory, confirmatory and impact assessment, I argue that the assignment of weights to these 12 indicators should be based on the varied approaches used in generating, managing, and using data. I emphasise the last three indicators (comparability; regularity and periodicity; and scope of data used for research and policymaking) to demonstrate the apparent data gaps, which provide a compelling justification to initiate a discussion on the use of a DIF.

Comparing data sourced from Ghana Statistical Service (GSS), World Development Indicators (WDI), World Food Programme (WFP), Food and Agriculture Organisation (FAO) and United Nations Conference on Trade and Development (UNCTAD) on unemployment, consumer price index, real effective exchange rate, and food insecurity, variations in levels and trends are found. In the context of data regularity and periodicity, I use historical data from 1975 to the recent 2021 Population and Housing Census on proxies for welfare to demonstrate potential challenges associated with varying intervals between data collection dates and assessment of the performance of policy outcomes across different political regimes.

The take-away messages are as follows: First, “Similar to the integration of conceptual frameworks into the development of research and policy papers, the same is required for a Data Integrity Framework to improve the outcomes and impact of policy interventions”.​ This framework will require the academic community to rethink its engagement with data in achieving data-led growth and development of Ghana’s economy. Essentially, efforts should be geared towards the documentation and estimation of Data Bias and, where necessary, require researchers to adjust statistical data in their prescription of policy directives.

Second, it is critical to review the exhaustiveness of the micro- and macro-economic variables that policymakers use in determining Ghana’s economic growth and development trajectory as well as the economy’s performance and resilience to pandemics and shocks. Among the 12 variables discussed in this lecture, I single out the urgent need for research and policy discourse on productivity and earnings inequality as the pacesetter for Data Accountability. This will be achieved by adapting some of the initiatives on use of data for economic growth and development in other countries. For instance, the legislative and executive arms of government in other countries publicly report the levels, growth rates, distribution and drivers of productivity and relate the findings to other socio-economic variables, especially earnings. This recommendation should be considered in the context of the call for the establishment of an independent National Data-Policy Institute, mandated with the overarching function of promoting and assessing research commitment and funding, and the interfacing of data and policymaking.

Lastly, this lecture has focused on an apparent data gap which I refer to as the “unspoken economic indicators in Ghana”. This includes the lack of research and policy discourse on productivity, earnings inequality, trade vulnerability, capital flights and stocks of grains, despite data availability. In my view, this has hampered Ghana’s economic growth and livelihood transformation agenda. This discourse should prompt researchers and policymakers to collaboratively work to improve use of data for the realisation of the outcomes and impact of policies.