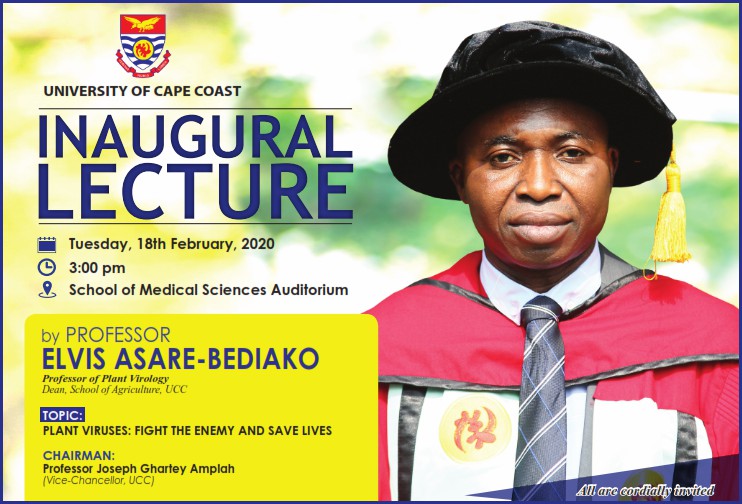 The University community and the general public are hereby informed that Prof. Elvis Asare-Bediako, Professor of Plant Virology and  Dean, School  Agriculture, University of Cape Coast, will deliver his Inaugural Lecture on the topic "Plant Viruses: Fight the enemy and save lives" on Tuesday, 18th February, 2020 at 3:00 p.m

ALL ARE CORDIALLY INVITED.

The Biodata  of Prof. Bediako and the abstract for the Lecture are as follows:

Prof. Elvis Asare-Bediako is a Professor of Plant Virology at the Department of Crop Science, School of Agriculture, University of Cape Coast (UCC), Cape Coast, Ghana where he has been teaching courses such as Plant Virology, Plant-Virus interactions, Pest Management, Food Microbiology and Immunology, Agricultural Microbiology, Fundamentals of Plant Protection and Integrated Pest Management since 2004. He has so far trained 10 MPhil and 5 PhD students in various areas of Plant Virology and Protection.

His area of specialization is virus diseases of horticultural, vegetable and food crops, with special interests in virus characterization, diagnostics, plant-virus-vector interactions, and development of integrated crop improvement strategies. He has conducted extensive research in virus disease epidemics in key food security crops and vegetables. He has been involved in breeding for a number of high yielding cowpea varieties that are resistant to viruses, striga and drought. In addition to these, he has also been involved in the development of two white-flesh and three yellow-flesh cassava varieties (high beta carotene content) which are resistant to cassava mosaic disease which have been approved and released in 2019. He was also part of the research team that developed two high-yielding, mealy and cassava mosaic disease–resistant cassava varieties that were released in 2006.

Prof. Elvis Asare-Bediako was appointed Lecturer in the Department of Crop Science in 2004 and by dint of hardwork was promoted to the rank of Senior Lecturer in 2009. In 2014, he was promoted to the rank of Associate Professor and subsequently to Professor in 2018. He is currently serving his second term as the Dean of the School of Agriculture of the College of Agriculture and Natural Sciences, University of Cape Coast. Prior to his appointment as the Dean, he served as the Liaison Officer for the Students’ Vacation Training Programme, School of Agriculture (2015-2016), Academic Counselor, Department of Crop Science (2015-2016), Faculty representative of the University Time Table Committee (2012–2014), Academic Advisor, Examination Officer and Seminar Coordinator (2004-2007). He has also been an external examiner for examination of theses as well as external assessor for promotion for University of Ghana, Legon; Kwame Nkrumah University of Science and Technology, Kumasi; University for Development Studies, Tamale; Council for Scientific and Industrial Research, Accra; Methodist University College, Dansoman, Accra; and Abeokuta Agricultural University, Nigeria since 2013.

He has authored/co-authored about 50 publications covering various aspects of plant virology and plant protection in peer reviewed journals and book chapters.  He has served as a reviewer for a number of journals including African Journal of Food, Agriculture, Nutrition and Development; Annual Research & Review in Biology; Australasian Journal of Plant Pathology, and Journal of Experimental Agriculture International.  He has attended and presented papers at several conferences and workshops, both local and abroad.

He has also served and continues to serve on a number of regional, national and international committees. He serves as a member of the Committee of Deans and Principals of RUFORUM’s 126-member Universities across Africa (2016-Date) and currently chairs the committee. He is also the Chairman of the eight-member sub-Committee of Principals and Deans of the RUFORUM (Regional Universities Forum on Capacity Building in Agriculture) member universities, elected to support the efficient operations of the Deans and Principals Committee, 2019. He was the Leader of the four-member team set up by Forum for Agricultural Research in Africa (FARA) that initiated a draft investment proposal for the implementation of Science Agenda in 2017, and he has been a Member of the Technical Committee on the development of a national action plan for the implementation of the Science Agenda for Agriculture (S3A) in Africa by the Ministry of Environment, Science, Technology and Innovation (MESTI), Accra. 2018-date.

Prof Elvis Asare-Bediako has also been a Member of the Steering Committee of the Research Extension Farmer Linkage Committee (RELC), Department of Food and Agriculture, Central Region Coordinating Council, Cape Coast, 2019-date, Chairman of Harvest Committee of the Wesley Cathedral, Cape Coast since 2018, Board member of the Central Regional Chamber of Commerce since 2017 and the founding President of the Plant Protection Society of Ghana since 2018. He was a member of 2006 National Best Farmer Selection team.

Prof Elvis Asare-Bediako had his primary education in Poano Methodist Primary School and Bekwai Anglican Primary School. He then proceeded to Bekwai Experimental Junior High School. He had his Secondary School Education at the Seventh-Day Adventist Senior High School, Bekwai-Ashanti, for his Ordinary and Advanced Level Certificates. He holds a Bachelor of Science in General Agriculture, and Diploma in Education (1997), a Master of Philosophy Degree in Crop Science (Plant Pathology) (2003), all from the University of Cape Coast. He obtained his PhD Degree in Plant and Environmental Sciences from the University of Warwick, UK, with specialization in Plant Virology (2012).

Plant Viruses: Fight the Enemy and Save Lives

The population of the world has now surpassed seven billion people and it continues to increase at a fast rate. Africa’s share of global population was projected to increase from 17% in 2010 to 24% in 2050. Africa’s population was also projected to grow from 1 billion in 2010 to 2.1 billion by 2050, with growth driven by countries in sub-Saharan Africa’s (SSA). The population of SSA will increase from 0.8 billion in 2010 to 1.9 billion by 2050 (UN Population Division, 2011). Population growth will greatly increase the amount of food needed to adequately feed sub-Saharan Africa’s people. As agriculture struggles to support the rapidly growing global population, plant disease reduces the quality and production of food. Plant disease is therefore a threat to global food security.

Plant diseases are caused by non-infectious or abiotic agents such as inadequate or excess of soil nutrients, soil moisture, light, temperature, among others. Diseases are also caused by pathogenic agents which include viroids, virus, fungi, bacteria, nematodes, phytoplasma and parasitic higher plants. For the sake of this lecture the emphasis will be on the role of plant viruses in reducing agricultural productivity.

Effects of plant viruses range from mild symptoms to catastrophes in which large areas planted with food crops are destroyed. Catastrophic plant virus disease exacerbates the current deﬁcit of food supply in which several millions of people especially in sub-Saharan Africa are inadequately fed, leading to hunger and starvation.

Thus, plant virus diseases affect food security which is of fundamental importance for human existence or livelihoods. Thus, plant viruses are enemy to human existence or livelihood.  For instance, in 1988, a new virus, East African cassava mosaic virus-Uganda (EACMV-UG) that causes cassava mosaic disease (CMD), destroyed cassava plantations in Central and Eastern Africa especially Uganda, forcing farmers to abandon the crop and causing famine and famine-related deaths.  Also. Rice yellow mottle virus (RYMV) is a damaging pathogen of rice in Africa, causing 10-100% yield losses in rice.  Research has shown that CMD and RYMV disease are serious threat to food security and income in Ghana. ‘Plant viruses have had a signiﬁcant impact on the food security and income of the peoples of sub-Saharan Africa’.

According to Food and Agriculture Organization, “Food security exists when all people, at all times, have physical, social and economic access to sufficient, safe and nutritious food that meets their dietary needs and food preferences for an active and healthy life.”

Food security is at the top of the list of Millennium Development Goals (MDGs) with the aim of eradicating poverty and hunger. Achieving food security in sub-Saharan Africa, however, remains a great challenge, and plant viruses are a major contributing factor. Therefore, to eradicate poverty and hunger in order to save lives, plant viruses “the enemy” must be eradicated.

Plant virologists have an obvious role to play in fighting the plant virus menace so as to meet the growing demand for food quality and quantity in order to save lives.

In this lecture, I present the global picture of food insecurity. I look at the role of viral diseases on food security and livelihoods and then discuss the role of plant viruses on crop productivity. I then discuss various strategies in fighting the plant viruses “enemy’ in order to save lives. Finally, I will discuss the challenges and the way forward in achieving effective management of plant viruses. This will ultimately enhance agricultural productivity, income and food security and hence improve livelihoods.